Artemisinin is a natural plant product whose derivatives form the basis for antimalarial medication. 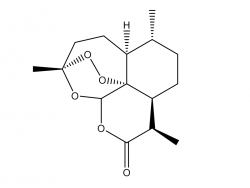 Also known as wormwood or quinghao, artemisinin was used in ancient China to treat fevers and what is now known as malaria. The compound was rediscovered in 1970s as part of an effort to fight strains of malaria that had become resistant to contemporary medications. Artemisinin derivatives with improved pharmacokinetic properties were developed, and by 2002 the World Health Organization had named these compounds the first line in defense against uncomplicated malaria caused by Plasmodium falciparum. [1]

Artemisinin is traditionally isolated in very low yields from the plant Artemesia annua. Additionally, approximately 18 months pass between planting and isolation of artemisinin. Fluctuations in supply and high costs threaten the availability of the compound in the developing countries where it is most needed.[1] Artemisinin therefore represents an important synthetic target. A successful synthesis would produce artemsinin, or a precursor, on the order of 25 g/L to be able to supplement global supply in a meaningful and feasible way. [1] The most successful strategy thus far, outlined below, has been to engineer microbes to produce an intermediate on the path to artemisinin which is converted by chemical reactions into artemisnin. 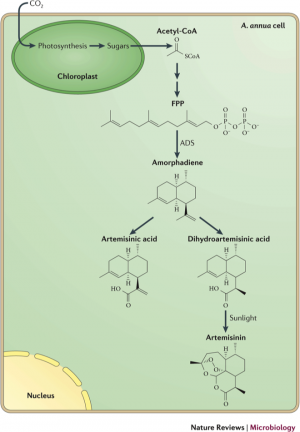 Figure 2:Artemisinin biosynthesis pathway in the plant Artemisia annua.[1]
The pathway to artemesinin utilized in A. annua is shown in Figure 2. By manipulating certain key features of this route, the Keasling lab was able to achieve artemisinic acid concentrations of 25 g/L. Artemisinic acid was chosen as the target because the route to the more direct precursor, dihydroartemisinic acid, was not well understood and conversion between the two is simple.

The first committed intermediate in the route to artemesinin is amorphadiene, which is derived from the isoprenoid farnesyl diphosphate (FPP). To increase overall flux into the artemisinin synthesis pathway, enzymes of the 1-deoxy-D-xylulose 5-phosphate (DXP) pathway, which produces FPP in E. coli, were overexpressed in that organism. This strategy increased production of pathway intermediates, but only to low mg/L amounts. [2]

In yeast, FPP is produced from an alternate route- the mevalonate pathway. Martin and coworkers [3] split the genes encoding the mevalonate pathway onto two plasmids (MevT and MevB) and expressed them in E. coli, as shown on the right side of Figure 3, below. They also expressed an ADS enzyme optimized for E. coli, which as shown in Figure 2 converts FPP to the amorphadiene intermediate. Strains expressing the mevalonate plasmids and the ADS, with optimized fermentation conditions, produced 0.5 g/L amorphadiene.

Studies by Pitera and coworkers showed that increased expression of the mevT operon caused inhibition of growth.[4] More specifically, accumulation of an intermediate in the part of the mevalonate path that was encoded by MevT plasmid inhibited fatty acid biosynthesis. To address this issue, the expression of enzymes just upstream and downstream from the intermediate was reduced and increased, respectively. Along with that change, replacement of the downstream enzymes with genes from other species resulted in production of amorphadiene at concentrations of about 25g/L . [5] [6] 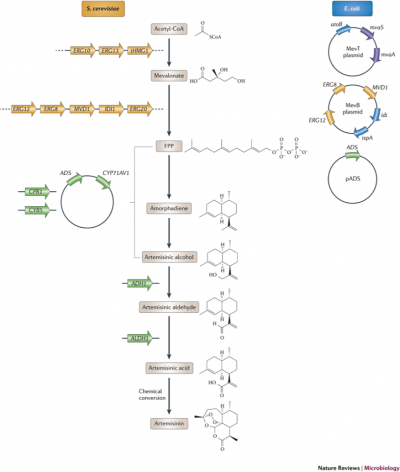 Figure 3: Engineering approaches required for pathway construction and semi-synthetic artemisnin production. At left is illustrated artemisinin pathway in S.cerevisae. On right shows how that system was encoded in three plasmids for expression in E.coli[1]

Once acceptable amorphadiene production levels were achieved, efforts were made to increase production of the more direct precursor artemisinic acid. In A. annua, amorphadiene is converted to more oxidized compounds, including artemisinic acid, by a cytochrome P450 (CYP71AV1). When expressed in amorphadiene-producing S. cerevisae, CYP71AV1 was shown to accomplish the conversion.[7] However, E. coli is generally unable to express eukaryotic P450 enzymes. Parallel tests of E. coli and S. cerevisae found that S. cerevisae produced higher concentrations of artemisinic acid (2.5 g/L vs 1 g/L for E. coli) under conditions suitable for scaling [8] and was therefore chosen as the host organism.

Once yeast was determined to be the best organism, a strain with desirable properties (CEN.PK2) was chosen and its mevalonate pathway was overexpressed to increase amorphadiene production. Further process improvements led to a strain producing 40 g/L of amorphadiene. [9] However, expression of CYP71AV1 did not lead to increased artemisinic acid levels.

Cells that expressed CYP71AV1 were found to exhibit decreased viability. The possibility that poor interaction between CYP71AV1 and its cognate reductase was creating destructive reactive oxygen species merited a decrease in the expressed reductase. [1] [10] Additionally, cytochrome b5 from A. annua was expressed to increase the rate of P450.[11] These changes were beneficial in amount of artemisinic acid but produced high levels of the presumably toxic intermediate artemisinic aldehyde. [10]

The route from artemisinic acid to artemisinin is shown in Figure 4. 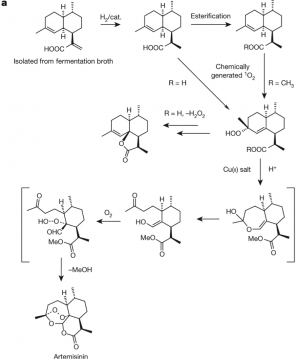 This method of utilizing reaction pathways in nature to achieve complex chemical transformations only becomes more exciting as new synthetic biology tools are developed. More efficient ways to study and manipulate genetic systems will allow access to much more difficult and complicated structures. Paddon [1] illustrates other molecules whose synthesis might be aided by a similar semisynthetic route, including vincristine, morphine, and prostratin. The artemisinin semisynthesis was successful in part due to thorough understanding of the pathway used. Targets with well known biosynthesis pathways may be more likely to succeed.

While the semisynthetic route has been most successful, there are other strategies. For example, Zhu et al completed a total synthesis of artemisinin.[12] While their starting material was inexpensive, it is not ready to be scaled up to global supply. Others have attempted to use transgenic approaches to improve artemisinin yields in A. annua or other plants, such as tobacco. These efforts seem to mimic the same strategies embraced the semisynthetic Keasling method in a plant host (ie overexpress key enzymes). While improvements have been made, they are not on the order of the semisynthetic route. [13]

VCU (2011) attempted to introduce isoprenoid pathways into Synechococcus elongatus for possible use as host organisms. Success in this endeavor was not clear.