Selectable Genetic Markers are vectors that are added to a genetic sequence that allows for the host cell to survive in a certain environment that would be lethal to cells that do not have the markers.

These markers are a fundamental part of synthetic biology. Currently, there exists no method of genetic transformation in which 100% of cells that are exposed to the exogenous DNA will take up and incorporate it, so that it may be transcribed into RNA (and then translated into proteins). Thus, selection is essential to synthetic biology, as it allows for the percentage of cells that have incorporated DNA into their genetic code to be selected.

Positive Selection - Cells expressing a specific allele are more likely to survive in a given environment, while cells that do not express this allele die.

Negative Selection - (aka natural selection or purifying selection) Cells expressing a specific allele are put in an environment that causes cell death. 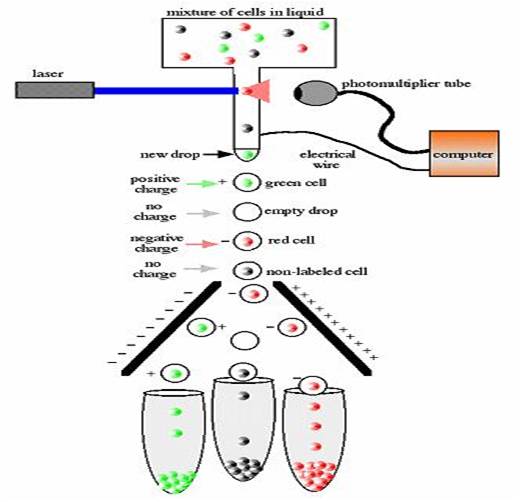 Counter Selectable Genetic Markers are vectors that are added to the genetic sequence that are either toxic to the cell or inhibitory to cell replication. These elements are often incorporated into genetic modification schemes in order to select for rare recombination events that require the removal of the marker or to selectively eliminate plasmids or cells from a given population.

Screenable Genetic Markers are vectors that are added to the genetic sequence that code for a protein that is neither detrimental nor helpful to the cell, but rather expresses a distinct property that allows for the observation of how many cells have integrated the synthetic DNA sequence (this is often done by coding for a fluorescent protein such as GFP).

Flow Cytometer - A flow cytometer is a machine with a laser light and sensors that is used in the detection of screenable genetic markers. The bacteria are diluted in a liquid, which is divided into droplets with each droplet having only one bacterium in it. The droplets are passed through the laser light and the sensor would detect whether any fluorescence emits from the droplet. The number of bacteria (and proportion) can be counted. An electric charge is applied to the droplet, and the droplets can then electrostaticly be sorted into one of two buckets.

Selection and Screening of Gene Switches in Escherichia coli

The study describes a technique to identify bacteria that exhibit a genetic trait, which they liken to a switch in an electric circuit. the presence of this switch would either turn on or turn off an expression, such as antibiotic resistance. They used a library of genetic traits (or 'riboswitches') to investigate, and the technique that they used involved attaching a fluorescent dye to the 'switch.'

They then used a flow cytometer to sort out those bacteria having the 'switch' from those not having it. The bacteria that have the 'switch' will fluoresce while those without will not.

Genetic switches are proteins that bind to a sequence of DNA and alter its expression. Depending on certain, specified conditions (usually the presence, or lack, of a chemical or physical signal), these switches can either be set to “ON” or “OFF.”

Duel Selection can be implemented for ensuring the expression of genetic switches. Positive selection markers that are expressed in conditions that induce the gene switch to be ON and negative selection markers that are expressed when such conditions cause the gene switch to be OFF are both implemented. Through cycles of positive and negative selection, the cells that code for the switch are isolated. This method, however, has problems as it requires plasmid isolation steps and increases the likelihood of false positives.

tetA - “encodes a tetracycline/H+ antiporter as both a positive and a negative selection marker.”[1] The protein allows for dual selection without the need to introduce multiple vectors. “Expression of TetA confers the cells tetracycline resistance (ON selection) while the overexpression of the membrane-bound protein renders them more sensitive to toxic metal salts such as NiCl2 as well as other compounds (OFF selection).” This process produces fewer false positives, and makes selection easier. [1]

Liquid bacterial cultures present a problem for selection markers, as false positive clones are difficult to isolate and in some cases the false positive could have a shorter replication time, and could take over the colony. Muranaka et al says the group anticipates the tetA selection marker could effectively be used in liquid cultures as it produces far fewer false positives. The group tested the efficiency of the dual selection marker by running a series of mock selections using riboswitches and model background clones. Their library consisted of four TTP riboswitch phenotypes: an OFF switch (–ThiMwt), an ON switch (+ThiM#2), an ALWAYS ON switch (ThiM-ON), and an ALWAYS OFF switch (ThiM-OFF). The group ran this trial in liquid media and used flow cytometry to count and sort the bacteria cells that were fluorescent. Though the method could be used for both solid and liquid media, after running the colony through positive and negative selection the group determined that the selection was optimized when the bacteria was in liquid culture at high concentrations. The selection is also useful as the host cell does not need to have a specific phenotype unless in the circumstance of there being an extrachromosomal element that allow for tetracycline resistance. [2]

Transcriptional factor LuxR activates when bound to the signaling molecule 3OC6HSL, “an acyl-HSL with a carbonyl substituent at the third carbon of the acyl chain.” Other variants of this transcriptional factor exist, such as the LuxR-G2E variant, that respond to different acyl chains. Collins et al implements directional evolution to produce a variety of mutated LuxR transcriptional factors, then implements a dual selection system to identify a variant of LuxR that still responds to straight-chain acyl-HSLs, but has no response to 3OC6HSL. [3]

LuxR, and mutants of LuxR, are genetic switches. Dual selection, as described in the previous section, is a useful method of selection available for genetic switches. In this case, the ON selection plasmid is pluxCAT (which enables the bacteria to be resistant to chloramphenicol), while the OFF selection plasmid codes for pluxBLIP (which encodes Beta-lactamase inhibitory protein). After each round of selection, both pluxCAT and pluxBLIP are deactivated by cleavage with a restriction endonuclease. The reporter plasmid pluxGFPuv, which contains the screening marker GFPuv which can be activated by the lux promoter, is used to assess the how the mutants of the LuxR genetic switch respond to various acyl chain molecules. Introducing straight-chain acyl-HSLs to the bacteria in the presence of chloramphenicol induced positive selection. For the negative selection run, 3OC6HSL, C10HSL, C6HSL and C8HSL were introduced into the media along with carbenicilin. The cells possessing the variant LuxR-G2E had the genetic switch OFF and thus resisted the carbenicilin (due to the OFF selection plasmid coding for pluxBLIP). Thus, LuxR-G2E a more signal-specific version of LuxR, was isolated. [3]

galK and 2-deoxy-galactose – The widely used counter-selectable gene that encodes for sacB. This marker, however, frequently undergoes spontaneous inactivation, which hinders its ability to act as a counter selectable marker. This problem can be solved by the introduction of the galK marker and 2-deoxy-galactose in addition to the sacB marker vastly reduced the amount of mutational inactivation in both markers (to a point where the mutational inactivation was lower then the recombination requency). [4]

In 2012, the Edinburgh team used sucrose, instead of an antibiotic, as an effective selection marker. Sucrose hydrolase was used as the selective marker, while nitroreductase and SacB were used for counter selection markers. Using sucrose instead of an antibiotic as a means of providing an environment with which cells could undergo selection and counter selection is helpful, as bacteria that are resistant to antibiotics have the potential to cause an epidemic of widespread disease (which it is against international law to release genetically modified bacteria with such resistance to bacteria into the wild). [5]

Articles regarding selection and counter-selection are currently mainly focused on reducing the number of false positives, and reducing the amount of vectors needed to reach a desired result. In the future, it is likely this trend would continue, however the Edinburgh team does make a point as to the safety regarding these bacteria, and further research on using the use of sucrose as a means of selection ought to be done.