Biological parts are refined, functional DNA sequences that have been standardized so as to act the same way in any biological device. In other words, biological parts, when added in sequence, do not change the set function of the other parts around them. These DNA sequences may be coding regions from genes, regulatory elements, or other genetic elements.[1] The Registry of Standard Biological Parts, or iGEM Registry, is a collection of these parts, commonly referred to as Biobricks™, that is being expanded constantly and can be used freely to create biological devices. Located at the Massachusetts Institute of Technology, the registry stocks BioBricks and biological devices that have been previously designed and accepts any new BioBricks (that adhere to the specifications) that are submitted. 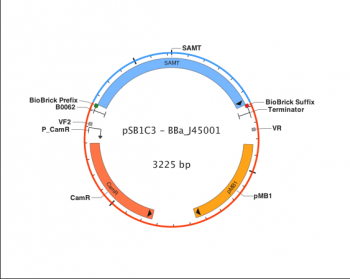 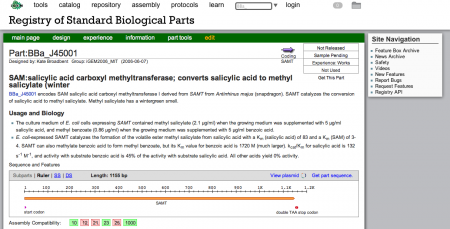 Main page for the BBa_J45001 BioBrick. The other pages for the BioBrick can be seen along the top.

The iGEM Registry is a constantly updating resource, so it requires a lot of upkeep to run smoothly. There are many problems or missing information on the various pages of specific BioBricks, and the website is often undergoing changes to make finding and ordering the parts smoother. Furthermore, the idea that BioBricks are the best method of standardization is being challenged. Many iGEM teams and synthetic biology labs are coming up with ideas to improve on the BioBrick standard and the other standards the iGEM Registry uses. While most of these are not very widespread, they may be more efficient or more useful than the current standards. This line of investigation is definitely something the iGEM Registry should look into. Most recently, the website was redesigned to simplify the page for each part, giving it just five individual pages to work with, while expanding the information available for it.[5] The iGEM Registry will continue to be refined and improved while expanding by the various additions from iGEM teams and synthetic biology labs around the world.